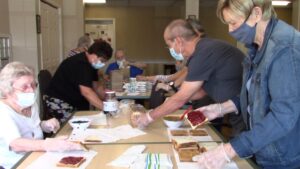 Every Monday at Ecumenical Retirement Community, groups of residents can be found gathering around huge jars of peanut butter and jelly. No, it’s not lunchtime. It’s the Peanut Butter Brigade!

Several residents in every level of care gather to make approximately 150 peanut butter and jelly sandwiches for St. Francis Soup Kitchen in Harrisburg. They dubbed their collective groups the “Peanut Butter Brigade” and enjoy giving back to people who need a little bit of help. It’s their “jam!” In addition to making sandwiches, residents carefully pack lunch bags including side items such as crackers and fruit. Campus drivers then deliver the sandwiches every Tuesday morning for the soup kitchen to distribute to needy people who seek its services.

Click here to watch a video of the residents in action!

“There are people out there that are hungry, and if this will help, then I’m good,” says one resident. 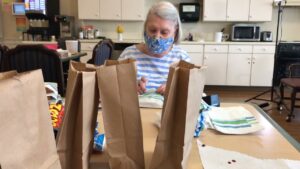 “I want to help the homeless. Give them something to eat!” adds another resident.

The Peanut Butter Brigade is just one example of purposeful service activities for residents to give back to their local community. It helps the Harrisburg area and also has benefits for the residents.

“Purposeful service is very important for our residents,” says Renee Harlow, fitness director-Ecumenical Retirement Community. “It helps [residents] to feel valued, that their work has meaning, they know they are doing something really good, helping people who really need it.”

The PB Brigade groups are more than making sandwiches, members also make new friends. Harlow says, “They have fun and sometimes we play music. Now they are like a well-oiled machine!”

“We all have a good time!” laughs one resident, while another concludes, “I love doing things like this. This is the best thing I could do all week because it’s for someone else.”