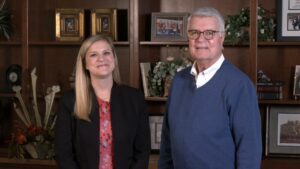 Mills moves into this role formerly held by Michael Leader, who, after more than 30 years leading the organization, has transitioned into a new position as Executive Chairman. “I have every confidence in handing over our organization’s leadership to my niece. Meredith has been leading teams on campuses and at the Home Office for more than 11 years and did an outstanding job guiding us through the pandemic,” he says.

Mills has held various positions at Ecumenical and Country Meadows including Marketing Director, Campus Executive Director, Vice President of Strategic Planning and most recently, Chief Operating Officer. She has a master’s degree in Health Administration from Penn State University and an undergraduate degree from Franklin and Marshall College. She is delighted to carry on her family’s more than 60-year mission to serve seniors. “I cannot express in words what an incredible honor it is to follow not only in the footsteps of my grandparents, parents, and uncles, but also in the footsteps of so many of the Country Meadows and Ecumenical ‘family members’ who  have committed many years to our mission to serve seniors.”

This year marks the 61st year of the Leader family’s involvement in the senior living industry, which contrasts a 2010 report by the Conway Center for Family Business that found the average lifespan of a family-owned business is just 24 years. Mills promotion transitions the family’s third generation into the top leadership role, despite a 2010 study that found just 13% of family-owned businesses are passed down successfully to a third generation.

“I consider it a privilege to transfer leadership to such a capable and experienced member of the third generation of our family,” Leader says, “Nothing pleases me more than to ensure that Country Meadows and Ecumenical Retirement Community will remain a family-owned and family-managed organization led by such an outstanding CEO.”

It was Mills’ respect and admiration for her grandparents that led her to a career in senior living. “I was motivated to come back to Ecumenical and Country Meadows by my grandfather’s request to see the third generation more involved, and was blessed to be able to spend a few years at Country Meadows while he was still with us,” she shares. “His strong commitment to innovation, integrity, and empowerment was impressed upon me during that time, and I am grateful for the opportunity to receive further mentorship from my uncles and father.”

According to an article in the Harvard Business Review, family businesses fared better during the pandemic as these leaders tend to think in terms of generations rather than being obsessed with hitting quarterly earnings targets. This allows these companies to take actions that put them in a better position to endure the tough times.

Mills agrees, noting that as a privately owned company, Ecumenical and Country Meadows was fortunate in its ability to be flexible and take risks to do what was right at critical times during the pandemic. “We kept focusing on doing the right thing and how could we do that no matter the cost. We’re independent enough that we could get around some of the red tape to do what’s right for seniors,” she says, adding, “And that’s what’s exciting, because there are so many opportunities to fill these missing spots in the continuum of care. Our team worked so hard to bring together all the partners who couldn’t figure it out in their silos. The result is we saved lives.”

Leader’s newly created position as Executive Chairman allows him more time to spend with his family while building stronger connections with residents and co-workers at every campus.

One of his goals is to travel to at least one of the company’s campuses every week to visit with residents, family members and co-workers to learn how to the organization serve seniors even better. (Country Meadows operates 10 locations in Pennsylvania and Maryland.) He says, “I also look forward to finding more ways to support, train and retain our co-workers. After all, my family’s tradition of caring for seniors is only made possible because of the services delivered by our outstanding team.”

Gov. and Mrs. Leader hoped the family organization would remain family-owned and managed well into the future. “I am honored to work alongside the third generation of our family and have the utmost confidence in their ability to lead our business,” says Leader, concluding, “Meredith is passionate about senior care and assures me that she will work her hardest to serve our customers, support our co-workers and strengthen our organization in a way that upholds our family’s promise to care for our seniors, making their lives better.”

Speak to an Expert Advisor