Love is just as sweet the second time around

Russel and Rose Marie Scott, both 95, say that love is just as sweet the second time around. 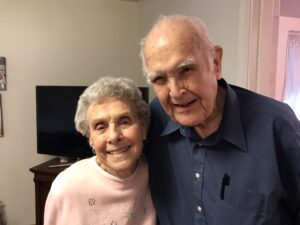 “It’s so wonderful because you don’t have the responsibilities you had when you get married the first time, says Rose Marie Scott. “You’re not saving for your children’s education, you’re not saving for a bigger house. You’re very satisfied with life.”

Both Russel and Rose Marie were married to their respective spouses for more than 50 years when they were widowed. To make friends and combat loneliness, both joined a fitness center in Harrisburg, where they met.

Russel noticed Rose Marie and was smitten. He says, “Friends that knew both of us said, ‘You’re wasting your time; she wouldn’t give you the time of day.’”

She did, after spending time with Russel during group outings with their fitness center.

“We went different places with a group from the gym and that’s how we really got to know each other,” she says, adding that she never expected to date after losing her husband.  “I was very lonely being a widow, and as we went on group activities, I noticed Russel and I had so many of the same interests.”

Click here to watch the Scotts explain why love is sweet.

Love blossomed and the two were married. Later this year they will celebrate their 17th wedding anniversary.

“We decided to take a try at it, and we’re still at it,” says Russel. “Every day is a blessing.”

Rose Marie adds, “Here [at Ecumenical,] we have no responsibilities; we just take care of each other. I guess the good Lord had a lot to do with it because we certainly are happy.”