Kimberly Vargas, a Personal Care Assistant (PCA) at Ecumenical Retirement Community, knows what it’s like to lose everything you have and start over. 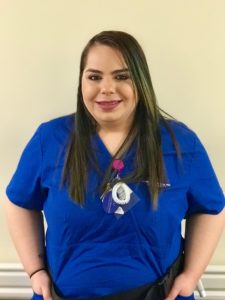 Vargas lived in Puerto Rico since she was 5-years-old until Hurricane Irma damaged the island with 175-mph winds last September. One month after the hurricane devastated Puerto Rico, Vargas decided it was time to leave.

“It was very unsafe. People were getting sick and dying because the only water source we had was the river, which was very contaminated,” she says. “The airport, even a month later, was so packed. It was pure chaos.”

Vargas then moved to Harrisburg, Pa., and found herself in a completely different world.

“My English is not very good, so when I first moved back to the United States, it was tough,” she says. “I’ve gotten better since I have moved but I still find myself trying to speak Spanish in conversation.” 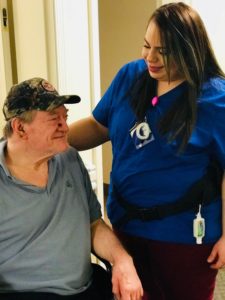 Kimberly Vargas enjoys getting to know residents at Ecumenical Retirement Community, such as Wayne Manson.

When Vargas was only five-years-old, her mother decided to move their family to Puerto Rico. Any English that Vargas knew then was forgotten, as Puerto Rico is a predominantly Spanish-speaking country.

“It’s rare to hear English in Puerto Rico, so slowly I lost any English that I knew,” Vargas says.

One thing that has helped Vargas and her language barrier is having conversations with the residents at Ecumenical. “I love all of the residents, I love talking with them,” she says. “They ask me a lot about Puerto Rico and how it is going down there. I have some family and friends there still, so it means a lot that they care.”

Vargas makes it a point to show the residents that she genuinely cares about their well-being. “I try to ask them little questions to let them know that I care,” she notes. “I don’t want them to feel alone.”

Throughout her first month at Ecumenical, Vargas has made many connections with co-workers, residents and families. She has even met two residents with whom she can share her Spanish heritage.

“There are two residents here who I can speak Spanish with, so that’s really fun,” Vargas says. “I like being able to connect with them in that way.”

Vargas is currently in the process of getting her nursing license transferred from Puerto Rico, however, since the island has suffered significant loss since the hurricane, it has been difficult. “Even though I’ve had such issues getting my license transferred, I’m so glad I found Ecumenical,” she says. “When I first got hired here I thought, ‘Okay, I’m going to live here when I’m older’ because it’s so nice! The rooms are so comfortable and the workers are all so kind.”

Although Vargas has been through the hardest part of her life in the past months, she has managed to find a silver lining amongst it all.

“Sometimes we are too comfortable. We don’t appreciate what we have when we have everything,” she concludes. “Now I am grateful for what I have. I appreciate everyone who is there for me and every little thing I have.”